A downloadable KONSAIRI for Windows, macOS, and Linux

A friend living in various places suddenly fell asleep.
Manipulate the fox, wake them up and lead this case to resolution!

When you eat with an NPC, your status will grow with the type you eat. Also, the NPC will provide a way to another area.

When Game was stacked then select to "REMOVE DATA" with pause menu in title screen .

This game (PICO-8) can be captured with F3 and F4 keys to share GIF movies! 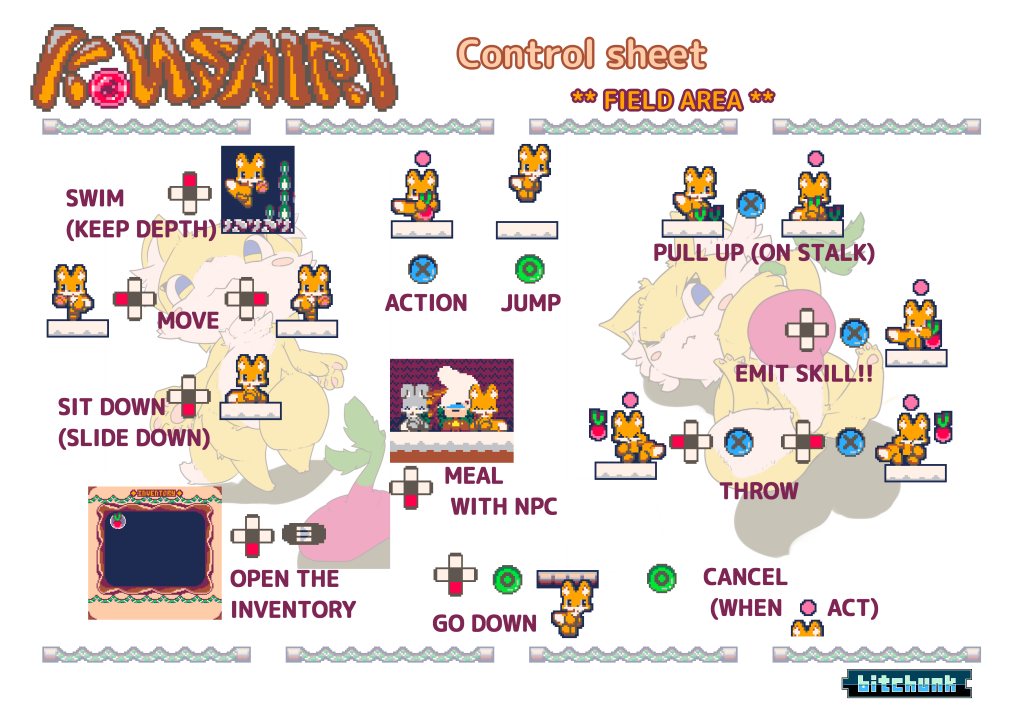 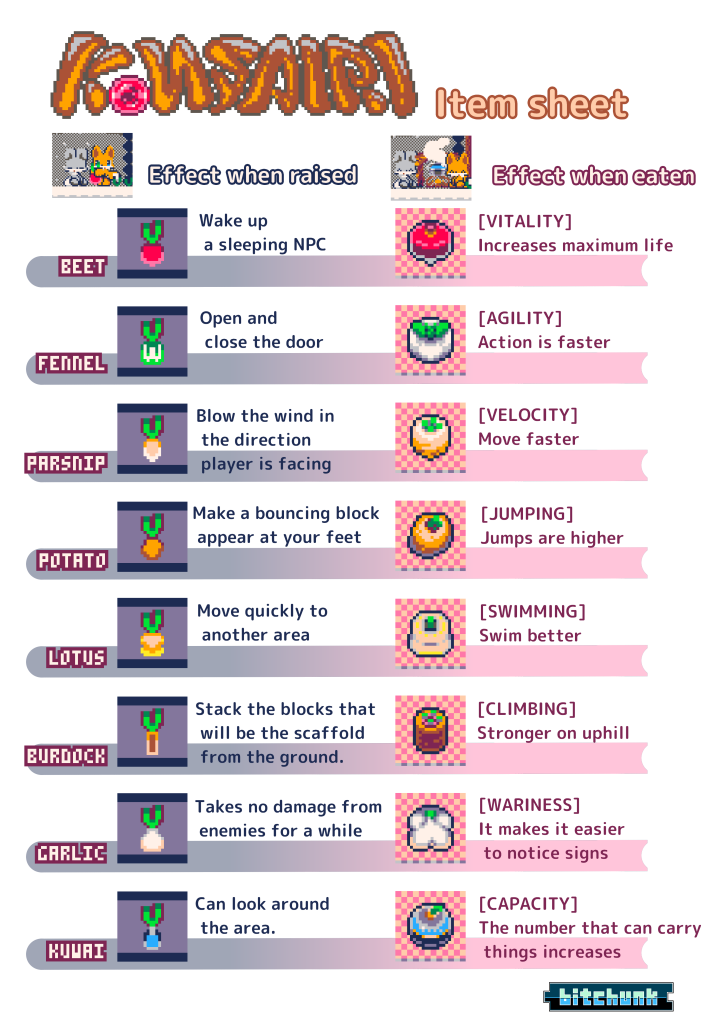 I like the principle, and gaining important gameplay stats after cooking feels good, it reminds me on a GBC Smurfs (スマーフ) game where you increased jump height in each level by picking sarsaparilla. The downside is that you start very slow and cannot jump high at all, which makes sense in terms of gameplay (you cannot avoid the enemies by jumping yet), but feels weird if you consider the game a platformer.

I noticed a few issues in the game:

Animation: animations have a long delay/lag after input (not the start of the animation, but the action confirmation). In particular, when giving vegetable to animal (Emit Skill) and throwing vegetable (Purify enemy). So the player receives feedback a bit late and may sometimes stop holding the button, unsure if the action is working or not. I’m also unsure about the input order, sometimes I hold the direction and press X hoping I’ll throw the vegetable but end up running into the enemy.

Design: slightly related to this, the first enemies are on a descending slope. The character throws the vegetable forward so it’s hard to hit them right. Apparently it works thanks to their wide hitboxes but I didn’t feel confident when throwing the vegetables at them.

Design: enemies suddenly appear out of nowhere and hurt you. There should appear some time ahead so the player has the time to react and attack/dodge them.

Bug: can open inventory (down+Enter) during intro cinematics (the color palette is lighter, so the inventory looks brigher too)

Bug: after cooking with the 2nd animal (2nd screen), the hint arrow was pointing left instead of right. If I went back to the first screen, the arrow would be pointing right again.

Bug?: You can give a vegetable to an enemy, and the animation performs correctly but nothing happens, it doesn’t purify the enemy, you’d better thow the vegetable at it. I don’t know if it’s intended.

Hi, komehara.
Thank you very much for your a lot of feedback and playing the game!

As you say, there's a lot more to stress a new player.
Many factors make it difficult to balance the game.

Animations for performing some actions are slow and useless.
In addition, you need to deal with suddenly appearing enemies.

These are alleviated as they grow.

In the beginning, we will reconsider our journey so that we can feel the need.
(E.g. You don't need to jump to avoid it. Appear, but not hitting enemies)

This is likely to be possible soon!

Bug: after cooking with the 2nd animal (2nd screen), the hint arrow was pointing left instead of right.

Eventually, multiple arrows will appear on the screen. At first it is a straight road, but not all.

Bug?: You can give a vegetable to an enemy,

Which vegetable was this?
At least Beet (red vegetables) has confirmed that nothing happens.
Other vegetables have other Emit Skill.

unsure if the action is working or not.

I have an idea. It is going to be solved with something like a gauge.

Once the problem is resolved, you will be notified via devlog.

OK, I didn’t know about Wariness. And yes, you can have a first enemy appearing on top of a platform above the character so it’s easy to walk under it and stay safe.

For the arrow, if I understood correctly, they just indicate neighboring areas/spawn points. For a new player, I think they look like hints for the next destination (like the GO!! arrow in beat’em up games), but you may make it clear by adding a small text “checkpoint” or “area exit” or a corresponding icon if a text is too long.

I don’t remember which vegetable I used on the enemy. Actually I just hold the X button in front of the enemy, so maybe it did nothing but as it disappeared just on the enemy’s sprite it gave me the impression I gave it? I should try avoid by Emitting when there is nothing around. In any case, it’s weird I’m losing the ingredient if it does nothing. I should probably keep it in my inventory if I didn’t consume it.

A time gauge may help yes. I would rather have faster animations, but apparently you’re saying slow animations are part of design because Agility would affect animation speed (including action animations, and not only motion).

I don’t think it is necessary for Emitting or other actions used in a “safe” context: since there are no enemies around, it doesn’t change the gameplay whether the action takes time or not, since nothing bad can happen during the animation.

By the way, I played your other game PITMAP. Just the tutorial, but I was quite impressed. I didn’t expect that kind of game, I think you like mixing genres not commonly together! (I played directly on your website using my Twitter account; the itch.io version doesn’t seem to react to my input (I use Firefox on Linux))

Thanks for the feedback.
I want to reflect them as much as possible.
And please understand that many specification changes are difficult.

The arrow marker that looks like a destination will be abolished and replaced with a pin marker.  (It also takes into account the pico8 capacity limit.)
Also, when the player arrives in the area for the first time, the player will be informed by scrolling that the NPC is in the back. It is a plan.
But these may not be the perfect solution either.

The disappeared vegetables may be a "door block flip" or "wind blowing" emit skill.
I want to add GFX to all skills, and I need a description to show what happened. (I posted a temporary skill list on the jam page.)

The concept of time will come out clearly in the next version upgrade. HP decreases gradually in areas other than the large trees, and a certain waiting time is required to eat again with NPC.
At this time, the animation speed has a small effect. Especially when the number of times increases.

You Unearthed another my game!
Thank you!
That's like playing most of the game with a tutorial alone. Congrats!

I wasn't prepared enough to run the game on the itch. (Cross-site scripting makes it difficult.)

I changed post type the Discussion board to Comments. 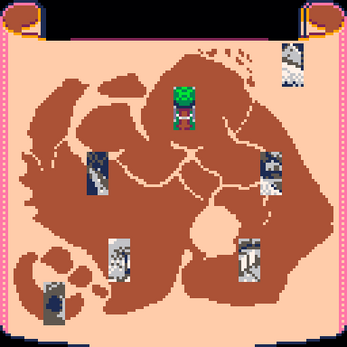